Discipled - Homily for the 21st Sunday in OT (C)

No one loves you more than Jesus Christ loves you.

No one loves you more than Jesus Christ loves you, … yet no one spoke of judgment and heaven and hell more than He did.

And if He should speak about heaven and hell it is precisely because He loves you.

In the first reading, therefore, we hear how God comes “to gather nations of every language,” even those that “have never heard of my fame or seen my glory.” He comes to us because He does really want everyone with Him in heaven. He loves all of us and He sent His Son to prove it.

But that same Son then says that not everyone makes it. Some are not “strong enough.”

So let’s talk about that.

Back in 2011, my brother Chris and I decided that we were going to climb the highest mountain in the Lower-48: Mt. Whitney. The summit stands at 14,500 feet and it’s a 23-mile roundtrip trek with over 6,000 feet of vertical gain. In other words, it’s a beast.

Now, you know where I’m going with this. The vast majority of people can’t just pull up to the base of Mt. Whitney without training and say “Yeah, I’m gonna own that.” Yet, some people try. And that’s crazy. And they don’t make it. They’re not strong enough.

So, too, we can’t just simply go through life and think that, when it comes to heaven, we’re all gonna make it—like it’s just assumed. And, admittedly, that’s partly the fault of us priests for not saying more about this. Funeral homilies these days talk about how so and so is “walking with the Lord” and how “they’re home with Jesus.”

But Jesus says “many… will attempt to enter but will not be strong enough.”

We often think that hell is simply for the worst of the worst: for murderers, rapists, facist dictators, and so on. But Jesus tells us that the bar isn’t that low. There are some who will say “Jesus, we ate and drank in your company and you taught in our streets”—We went to Mass, we heard the bishops teach, … I was an altar server ... I went to Catholic grade school… I was a priest...

We’ve gotta have a deep down, head-to-toes, light-shining-in-the-darkness kind of love which is strong enough to persevere when the climbing of life is tough.

If you’ve been watching the Olympics, you’ve seen our athletes win gold after gold. And that has come from hours and hours of training, a life totally oriented toward that goal.

And I could talk more about that, about how, in order to grow in this strength, we have to be disciplined. But I want to go deeper. (After all, you should know about that anyway).

The word “discipline” comes from the same word as “disciple.” And when we talk about Jesus’ disciples (not His apostles, but His disciples)—when we talk about them, we are talking about those men and women whom Jesus chose and whom He taught and challenged and whose lives were changed and strengthened because of it, and thus oriented totally and radically to the life of Christ.

Jesus disciplined them. Or, to put it another way: Jesus… discipled them.

Being discipled means being formed by another: strengthened by that person, sitting at their feet and learning and changing our lives because of it.

When my brother and I first talked about climbing Mt. Whitney, it was my brother who discipled me in the ways of making it to the summit. He showed me what was essential for the journey; He hiked with me on other paths to train me in what dangers to avoid and what views to see; in the days leading up to Whitney, He took me higher into the thin air to help acclimatize and discipline my body.

And it was a narrow way—not because my brother was making it difficult (he wasn’t), but because I had never done it before. Yet because of that discipline, we made it to the summit. I had been discipled.

For Catholics, being discipled is so very important.

For example, the Holy Mass is called the source and the summit of our faith. Indeed, there is this mountain imagery all thoughout the readings today: the gospel has Jesus on His way to Jerusalem—which is up a mountain. In the first reading, heaven is described as God bringing all of His people up the “holy mountain.”

So, if this Mass is called the summit of our faith, this Mount Calvary, doesn’t that imply that it is also a climb? And if it's a climb, then wouldn't that mean we should have some people helping us on the way, showing us the route, holding us accountable?

In other words: Who is discipling you?

I am convinced that a lot of people don’t “get anything out of Mass” precisely because they haven’t been discipled in how to climb this mountain. Because, yeah, it can be hard. And, quite frankly, if we have had no spiritual work-outs in the week prior to it, we’re not gonna make it. We will be a people with “drooping hands and weak knees” as Paul says. The climb will be a long slog and we won’t make the summit and see the views that the saints were talking about. We will be like those who cried out, “Lord, I ate and drank in your presence"—wasn’t that enough?

No. It wasn’t enough. You didn’t do the training, you didn’t have the strength, you didn’t make it. Who was discipling you, anyway?

Now, I love you. So I want to help you on the climb. I want you to reach the summit. This is the Year of Mercy. So, can I do for you what my brother did for me? Can I give you a few pointers so that you will make it?

1)      Every day you have to sit quietly and listen and talk to God in prayer. Be disciplined. If we don’t do this in the week, then this hour of heaven-meeting-earth-which-we-call-Mass will be hell. No athlete can come to the match without practice and expect to get something golden.

2)      You have to study the climb and come prepared for the summit. You don’t just climb Mt. Whitney without studying it. So, read the readings, reflect on the prayers, check out what the saints who have summitted say about it. Get excited about it. Else, you’ll be sitting here with your arms crossed and bored and looking for a way to get to the bathroom or stand in the back, leaning against the wall.

3)      Don’t leave early. What person would spend so much time climbing a mountain and then not savor the view? Leaving early is one of the most undisciplined and crazy things… “Lord, I ate and drank in your presence, let me in!”—No. You didn’t even say thank you. You did the exact same thing Judas did. Heaven was at that Mass, but Judas had things going on—and he never made it to the summit.

These are just little things, but this is how we are to be discipled—disciplined—and that will give us strength. And as we grow in strength, the climb will become easier. The narrow way won’t be as hard. We’ll find that we’re almost there…. 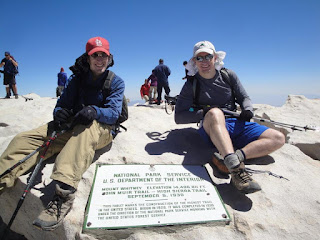