A blessed Solemnity to you all. One of the reasons why I get really excited about the Immaculate Conception is that it sheds light on so many of the RBQs. RBQs: that is, Really Big Questions. We all have them: Where have I come from? What happens after I die? And what is the meaning of my life? Why is there suffering? And so on. The Immaculate Conception helps us to see the answers to these questions.

In 1859, Charles Darwin published his famous “On the Origin of Species.” It was his attempt to explain where we have come from and, to some extent, where we are going and the meaning of things in the here and now. If there is one word that gets to the heart of his publication, it is the word “Evolution.” Now, I’m not going to address here the pros and cons of his argument. But at the heart of his evolution argument is that things progress by biological processes and things such as the survival of the fittest.

Five years prior to this, in 1854, the Catholic Church provided a different explanation for the beginning of things. Instead of saying that everything is the product of chance and mere biology and material processes, the Church infallibly declared that God can radically enter and alter human history and cause a new kind of evolution: that is, at the moment of the conception of the woman, Mary, when God infused her with a soul, He did so in such a way that she would not experience the devolving effects of sin.

In other words, there is a supernatural reality to the existence of things; evolution may not be just simply the product of biology. There may just be a supernatural side to things. And, looking at the other side of the coin, things may not just simply evolve; things can also de-volve—that is, things don’t necessarily go from a lower species to a higher, but they may go from a higher to a lower.

Take, for example, Lucifer. He was one of the most beautiful of the angelic creatures. But he chose not-God; he chose things lower. As a result, Lucifer de-volved: we see him in the Garden like a serpent.

The same can be said for humanity: sin de-volves us. Have you ever seen the movie “Wall-E”? It’s a wonderful movie about humanity and our consumerist tendencies and neglectful ways. Situated many centuries in the future, humanity has trashed planet Earth and rendered it uninhabitable. So, humanity boards a large space-ship and zooms into Outer Space to let Earth clean itself up and become inhabitable again. While on this ship, generations come and go. The people become mired in their electronics and forget how to walk and talk to each other. There’s a wonderful moment where we see the pictures of the past six captains and how they have de-volved:

This gets at the heart of such questions as “why is there evil?” and “why is there suffering?” and so on. The reality is, when God made humanity, He made Adam and Eve immaculate; they were not made to die, but to live forever; they would never get sick nor would they have arguments; creation was in peace and harmony, too. But when they chose not-God, devolution began: Adam and Eve could now become sick and die; arguments would rise between them; creation too would become disordered (because Adam and Eve were once its guardians). The situation was so dire—de-volution would lead to humanity’s utter destruction. This is why there is suffering and evil; this first sin—called the Original—explains why we struggle to do good and avoid evil, and so on.

At the moment of Mary’s conception, God preserved her from the devolving effects of Original Sin. He kept her Immaculate—from the Latin “im”+“macula” meaning “without stain, without sin.” This is the moment of Mary’s redemption. This is the moment when de-volution is reversed and we see a new, supernatural revolution: that is, that grace elevates us and raises our nature and helps us to progress in real and substantial ways.

It was fitting that God would do this.

First, if His Son, the Word, was to become flesh, He wouldn’t take on any ordinary or corrupted flesh. He would take on immaculate flesh. Mary, made immaculate, would be able to provide that.

Second, it is fitting that God would make Mary immaculate because it restores the woman to where Eve once was prior to her decision: When God made Eve, Eve was immaculate. Mary, just as immaculate as Eve, would have all the gifts and knowledge to make a decision just like Eve did. And in such a way, Mary’s definitive Yes would be able to undo Eve’s definitive No. In other words, God was willing that woman, once integral to the condemnation of humanity, would be vitally integral to humanity’s redemption. To put a very fine point on it: without Mary, there would be no Christmas.

Finally, it is fitting because mothers deserve the best. And God fashions for us a mother. He could have preserved us all immaculate, but that would not be fitting because we would not receive a mother that way.

That last point seems unsatisfying. We are not preserved immaculate. But it brings us to the last of the RBQs: where are we going? We pray for heaven. And in heaven, there is no sin, right? Which means, that everything is immaculate. After all, there is no suffering, there is no death nor tears nor injustice nor any of that. Which means that there must have been some kind of supernatural evolution between humanity in the here-and-now and the humanity that exists in heaven.

If we are to be in heaven, there must be some supernatural change in us! We must become immaculate. And that begins right now: in the confessional, when your sins are washed away by the grace of God, you become as clean and innocent as on your baptismal day; you become immaculate. In the Holy Eucharist, you receive the immaculate body of Christ and also His divinity—both of which help your body and soul “evolve” and become elevated to partake in the divine nature (cf. 2 Peter 1:4). Whereas Mary is redeemed and rendered immaculate at the moment of her conception, our redemption is given to us here and now and the grace is given here to render us immaculate.

These are the gifts of Christmas. We celebrate Christmas not only because it’s about Jesus, but also because it is about Jesus who comes to save us from the devolving effects of sin and to raise us up to the higher nature and realms of heaven.

And the Father could not wait to give us these gifts! That is why, even before the coming of Christ at Christmas, He gives to His mother this redemption and elevation. The Immaculate Conception is the first Christmas gift.

We pray, therefore, that with Mary accompanying us to Christmas, we may be purified of our sins and welcoming of our savior. May we receive all of the graces God wants for us and be raised to the highest of our species of which Mary is the most beautiful and immaculate.

Mary, Our Mother and the Immaculate Conception, pray for us! 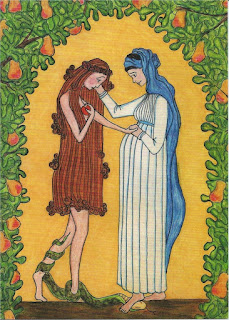