The Makings of a Dessert

What is your favorite dessert? You know, that sweet goodness that fills you with joy at the first bite: Pineapple Upside-Down cake? Cookies? Ice cream? For me, it’s chocolate cake. With a glass of milk. One big heaping bite of chocolaty goodness. It’s heavenly.

This past week, Monsignor and I put on a special dinner for a few of the young men of our parish who wanted to know more about us priests and what we do when we’re not eating bon bons and watching Law&Order all day. Monsignor wanted the dinner to be special, so he was going to make a tasty entre. But then he had the bright idea that I should make the dessert.
I’ve been known to burn water.
But he has this recipe, he says. It’s really easy. It’s for a chocolate trifle.
Chocolate? I’m interested.
What is a chocolate trifle? Let me tell you. It has layers. 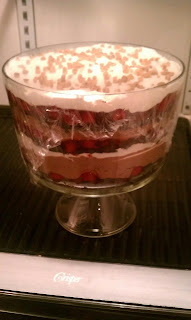 And if that’s not enough, we repeat the whole process—for a total of twelve layers!

(Monsignor, we should do this more often!)

Now with all those layers, certainly the recipe would be difficult, I thought.
But monsignor made it easy: he bought me the chocolate cake, he bought canned cherries, he brought whipped cream, and he bought the moose—which comes as a powder (who knew moose was a powder?). So, everything was all ready-made, just layer it all and throw it into the fridge. No cooking, stirring, mixing or anything else needed.
Except…. Moose is not a powder.
Not knowing this, I added the powder as its own layer. When I was later “reminded” that I needed to add milk to the powder, I was a little embarrassed. But I thought that I could remedy the problem by pouring milk on top. This only made the problem worse.
Yes, Monsignor, the dessert is coming along just fine!

Now, in full disclosure, I knew that I was not well-practiced in everything kitchen. So, before any of this disaster happened, I actually had asked Monsignor to help me through. Very kindly he walked me through the recipe step-by-step and taught me how to make a chocolate trifle—and how to make chocolate moose. So… I didn’t mess up the moose or the dessert. In fact, the only mess that was made was of the pan after it was licked clean. It was a heavenly trifle.

The Apostle at the Kitchen of the Heavenly Layers

Ok, so this relates to today’s readings. (I know you’re wondering how I’m going to make this all connect).
At the heart of today’s Gospel, Jesus promises to give the Holy Spirit to the apostles. This Spirit, Jesus promises, will remind the apostles and will teach them. Fast-forward through the Ascension, Pentecost, and the Apostles going out into the world, and we see Paul in our first reading having to deal with a problem of the Church that Jesus never had to deal with: namely, are the Greeks required to follow the Jewish rituals if they are to enter into heaven?
It was like the question I had in the kitchen: do I pour the powder in the pan or am I supposed to mix it with milk first?
I didn’t know what to do. I hadn’t been taught. Nor had Paul about this matter.

In our own lives, we face such questions, questions of morality that have an effect on our eternal salvation—on whether the chocolate cake comes out tasty, if you will. Such questions as: can I rally be married outside of the church and still be “cool” with the Lord? Can I use contraception? Can I really do whatever I think is right and hope for the best? Can I do whatever I want and really expect that my eternal life will come out all right?
There are answers to these questions. Right answers. Not just: eh, it doesn’t matter; do what you want. No, that might ruin things. And our lives are more important than desserts.

So, in the case of Paul, he goes to the Apostles. This is a huge detail. Paul could have simply answered the Jews and Greeks on his own. But he defers to the ones who Jesus promised He would give the authority and power to teach the Truth and to teach in His name. That’s the apostles. He told the Apostles: “whoever hears you, hears me.” Paul recognizes this; He recognizes His master’s voice in the voice of the Apostles. And so Paul, faced with this moral question, knowing that eternal life is on the line, goes to .
And remember: Paul is in . This is a long walk. It is dangerous and taxing. It would have been easier for Paul to just make up an answer and proclaim it as truth. But he takes the road of suffering.

Admittedly, my friends, this is most unpopular, especially in our do-it-yourself culture; and doubly so in a culture where there is rampant distrust of authority—especially in an authority that speaks with authority and “specialness” (as though having hierarchy and the Holy Spirit is something special). It is rank with inequality. Yes, it is unpopular to be poor of spirit.

But note the second reading. In the Book of Revelation we see the new, heavenly descending from the sky. It has twelve gates, representing the twelve tribes of . And it also has a foundation of twelve layers. And what are those layers made out of? No, not chocolate cake! They are made out of twelve stones—and with the names of the twelve apostles.
Now you know how important foundations are to Jesus. He says that a house built on sand will fall. But a house built on rock will endure storms, winds, floods, everything. Now, heaven is Jesus’ home—God’s dwelling. It is what makes heaven, heaven. And what is the foundation to God’s house? The twelve apostles! He builds on them such that when they teach, we know that we are on solid rock.

Where are the apostles today? The early Church tells us. Whether in the first generation writings of Paul to Timothy and Titus or in the second generation, as in the writings of St. Ignatius of , we see that the bishops are the apostles. They are the ones anointed by God to teach definitively on matters that pertain to our salvation. This is why we pray for them at every And it is why Paul, a good Catholic, would go to them when even he—a great saint—had a moral question.
He wanted to get the recipe right.

Taste and See the Goodness of the Lord!

In the Gospel, this is called keeping His word. We keep his word when we listen to Jesus by listening to His apostles; we keep his word when we keep the commandments.
When Jesus talked about the house’s foundations, he begins by saying: “Every one then who hears these words of mine and does them will be like a wise man who built his house upon the rock” (Mt 7:24). And Jesus adds, “Whoever hears you, hears me” (Lk 10:16).
This is not restrictive in any way; it is seeking the wisdom of God which He offers us as we walk through difficult kitchen of life; it is a following of the recipe that has been handed on from generation to generation—just like our favorite recipes from mom are.
And what does Jesus promise if we follow the recipe and keep his word? He promises chocolate cake! He says, “my Father will love him” – I will love you!—“and we will come to him”—yes, to you!—and make our dwelling with him.” Jesus and the Father will DWELL with you!
Now, we just heard that where God dwells is rightly called heaven. And now He’s promising that whoever follows these shepherds and keeps the commandments—that He will dwell in that person? That means that—… I’m in a stupor just thinking about this—it means that God is going to bring heaven to you. Here. Now.
And the Eucharist! Heaven coming to us! God edible!
Yes! Keeping God’s word and receiving this Eucharist means that we will begin to taste and see the joys of heaven right here on earth: “My food is to do the will of him who sent me” (Jn 4:34). The chocolate cake isn’t so far away as we await the timer to go off. We begin to taste this heaven now.
And we know this when we follow a recipe for making chocolate cake. As we follow the recipe, we begin to enjoy the dessert: the smells of the cake, it’s looks—and, what else? What else do we get to enjoy when we make chocolate cake? Yes! The beaters and the spoons and the bowls on which the chocolate still clings!
In the moral life, this means we experience the freedom of being released from the slavery of unforgiveness and resentment, from the chains of stuff and the jealousy of comparing lifetstyles, from the bondage of meaninglessness and happenstance. We begin to see the beauty of reality as it really is and embrace all the layers of it.
And we come to realize, just as we do when we make a cake, that there are some things in our moral life which we must remove or which we must never add at all. Likewise, there are some things which we must always add. We realize that there are times to do things and times to wait. We realize that sometimes we need help in the kitchen, and seeking the wisdom of others is not a sign of weakness, but an exercise of wisdom itself.
Yes, some recipes are difficult. But God tells us: it’s worth it. Keep it up. And I’m here to help you. We’re in this together. You’re really going to love this chocolate cake. Don’t you smell it? Here, here’s the spoon. Isn’t it heavenly?

Posted by Father Anthony Gerber at 11:13 AM